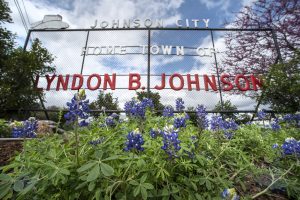 Johnson City, the county seat of Blanco County, is at the junction of U.S. highways 281 and 290, twelve miles north of Blanco in the central part of the county. Settlers living along the Pedernales River in the rugged central part of the county, among them one James Polk Johnson, for whom the town was later named, thought that the county seat at Blanco was not accessible, so in 1876 they called for an election to move the courthouse closer to the geographical center of the county. When this attempt failed, the citizens followed Johnson's lead and began publicizing the idea of establishing a new community. The site chosen was on land originally granted to James Fentress, which belonged to Johnson. A post office was established there in 1878, and soon afterwards town lots were offered for sale. In 1879 the people successfully petitioned for an election to choose a new county seat but were defeated. Meanwhile, the town continued to grow, especially boosted by the construction of Johnson's two-story office building and his hotel. He also donated lots for schools. In 1890 another county seat election, a hotly contested one, made Johnson City the county seat.

Though its new status boosted the economy of the community, Johnson City did not get modern utilities until the 1930s, when Lyndon Baines Johnson, a relative of the founder of the city, sponsored legislation that introduced full electric power to the area under the Lower Colorado River Authority and the Pedernales Electric Cooperative. After Johnson became a United States senator and began his climb to the presidency, telephone service rapidly progressed from the old magnetic box phones to dial service and then to worldwide service. In addition, when he returned from the White House, Johnson made the United States a gift of his lands, now the Lyndon Baines Johnson National Historical Park.

Johnson City, for many years mainly a ranch trade center, had a steady tourist business from its origins. Though the number of businesses dropped from twenty in 1914 to seven in 1933, it rose to forty-two in the mid-1950s, when the town was incorporated. In the late 1960s and early 1970s, when Johnson was president of the United States, the major income in Johnson City came from the tourist industry, and the number of businesses rose to fifty-two. By 1986 the number had dropped to twenty-six. The town's newspaper, the Record-Courier, was established in 1883. The population fluctuated from 400 in 1925 to 950 in the late 1940s, and from 660 to 800 between the late 1960s and the mid-1980s. Johnson City continues to be mainly a tourist center. In 1990 the population was 932. That figure increased to 1,191 by 2000.